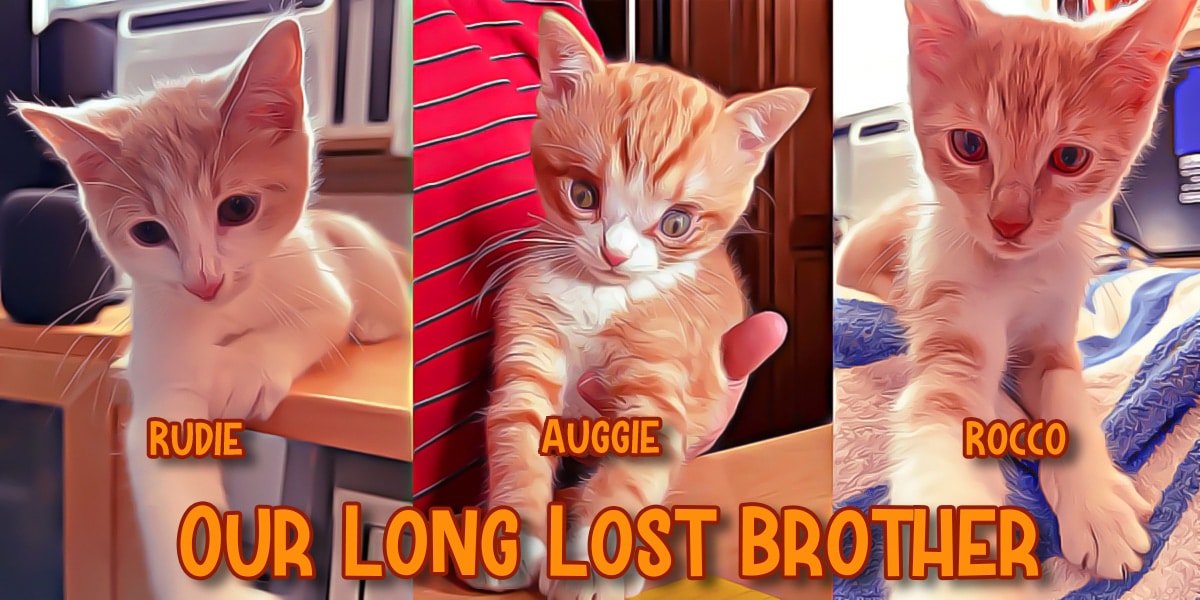 As you may or may not know, there’s been a LOT going on. On June 14, 2021 I had to put my beautiful big orange boy-cat Rocky to sleep. A week later, I got two new brother Manx kittens: Rocco & Rudie. Rocky’s sister Rose who is now 15, missing her brother, and having two new kitties to contend with, had not been eating much. Within a week of getting “the boys” something happened to Rudie and I ended up taking him for a vet emergency visit. One thousand dollars later, they didn’t find much of anything & by the next day he was his old/young self—wreaking kitten havoc and mayhem. A week later I HAD to take Rose to the vet to get checked out, I was scared of losing her too. THAT I couldn’t stand to see happen. So this past month has been a rollercoaster of emotions—for me and the cats! 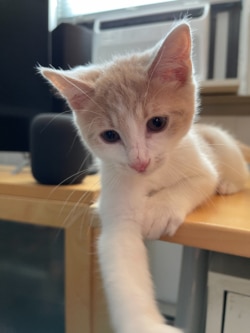 When Rocco and Rudie “adopted me” I was told by Staci from the foster home/rescue “All God’s Creatures” that Rocco & Rudie had another brother who was sent to another special needs foster home that cared for, and helped fund medical treatment for cats with Hydrocephalus: water on the brain. With all that was going on, I didn’t much follow up on what brother Auggie was going through, nor his progress. Fast forward to today when I got a text  message from Staci showing a photo and Facebook post about Auggie. OMG! He is so cute! Plus he’s doing better since his meds were adjusted. He’s still waiting on brain surgery to install a shunt, but holding his own. His round head (due to the fluid) and his bug eyes, on top of his beautiful orange markings—makes my heat melt! It was so very cool to see him & know he’s in a place to get the care and special attention he needs. 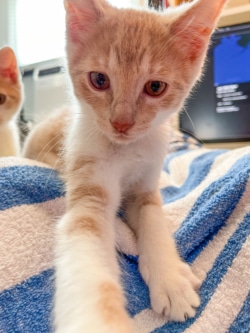 So I posted this photo (below) on Instagram on @RoccoAndRudie’s account as well as Facebook. I also put links to the foster home he is in: SHAHS Non Profit Rescue Society. 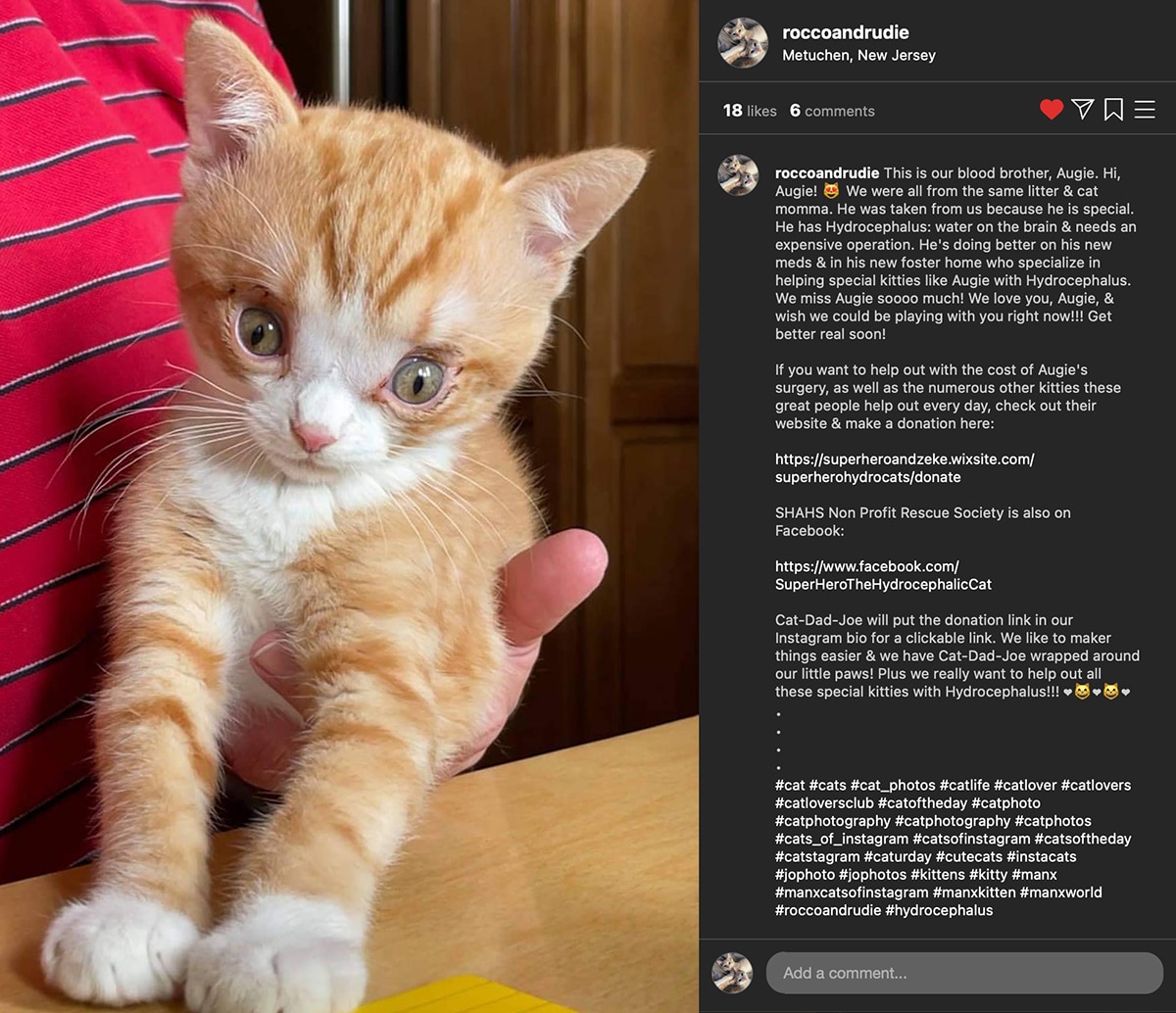 What’s even better? We got a reply from Auggie via Instagram:

@superheroshahs Hiya Rocco and Rudie and your daddy Joe! 😺 I misses you guys too and wish we could play. I has a ginger brofur named Mufasa who is my BFF. Himz needs a shunt placement too! 😿 We are both stable on our meds right now. Our VP programmable shunts have been ordered. My brofur Super Hero who is 8 yrs old has a shunt and my sisfur Lilo who is 2 yrs old has a shunt as well. I am scared for my surgery but they said everything will be okay.
Thank mew for tracking me down and for helping raise donations for my surgery. Maybe one day down the road we can all have a play date! 😺 Time for lunch and my meds. Talk to you soon!! Love, Auggie!! 💛

Little Auggie, it’s okay to be afraid, but you have lots of people who love you and support you and want you to be the best brofur you can be!

You got this little dude!
Auggie & His Buddies 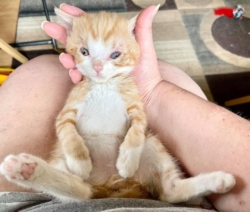 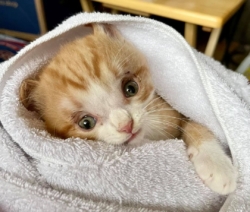 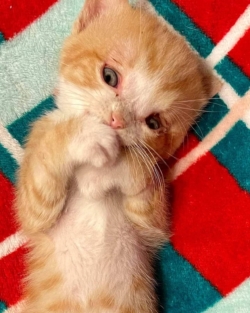 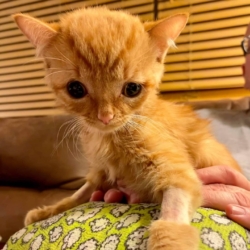 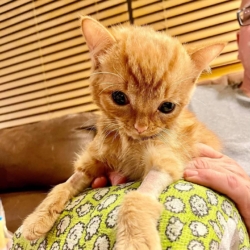 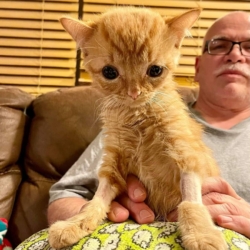 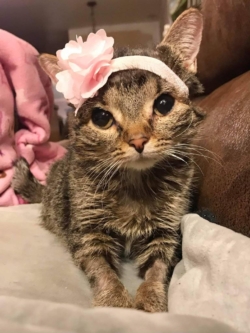 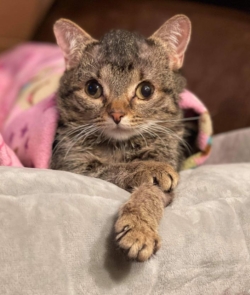 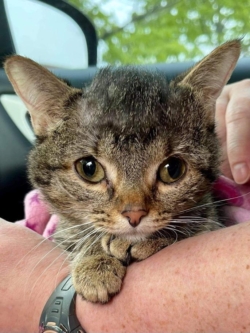 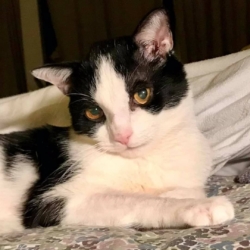 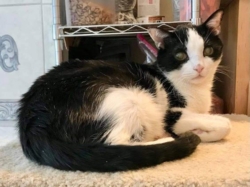 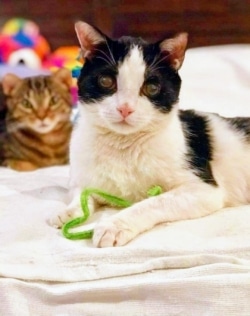 I’m so glad I found Auggie! I’m happier to know more of his story and about Hydrocephalus. What’s even more heartwarming are the kind people taking care of all these afflicted cats, and the bonds the cats and their humans make on us all. I will certainly be making a donation to help Auggie & his BFF Mufasa get the help they need to live long lives. And I really do hope there might be a playdate/reunion for Rocco, Rudie, & Auggie. That sounds wonderful! 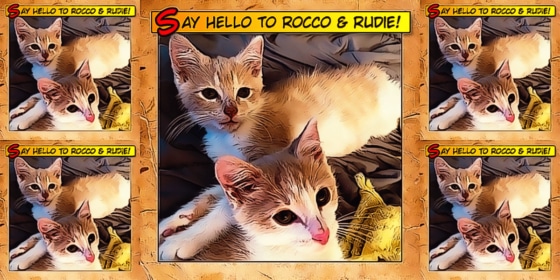 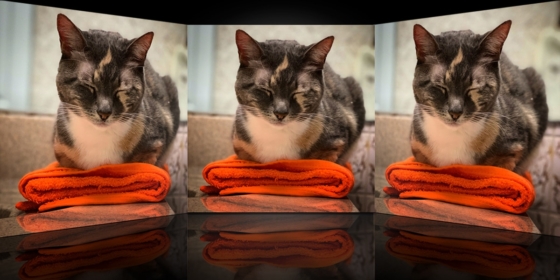 Orange you glad I’m around? 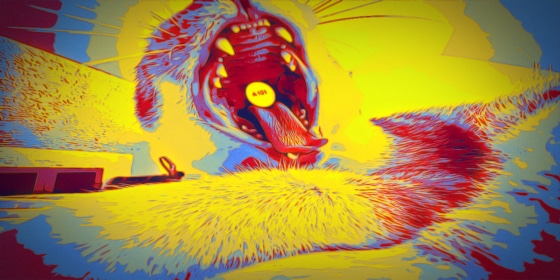 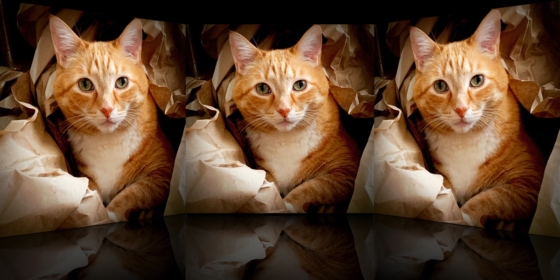 Equal Time For A Rock Star! 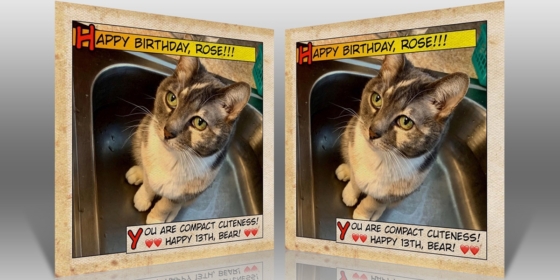 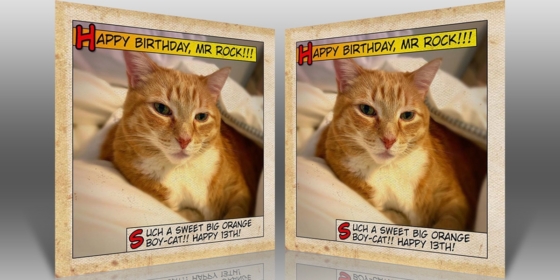