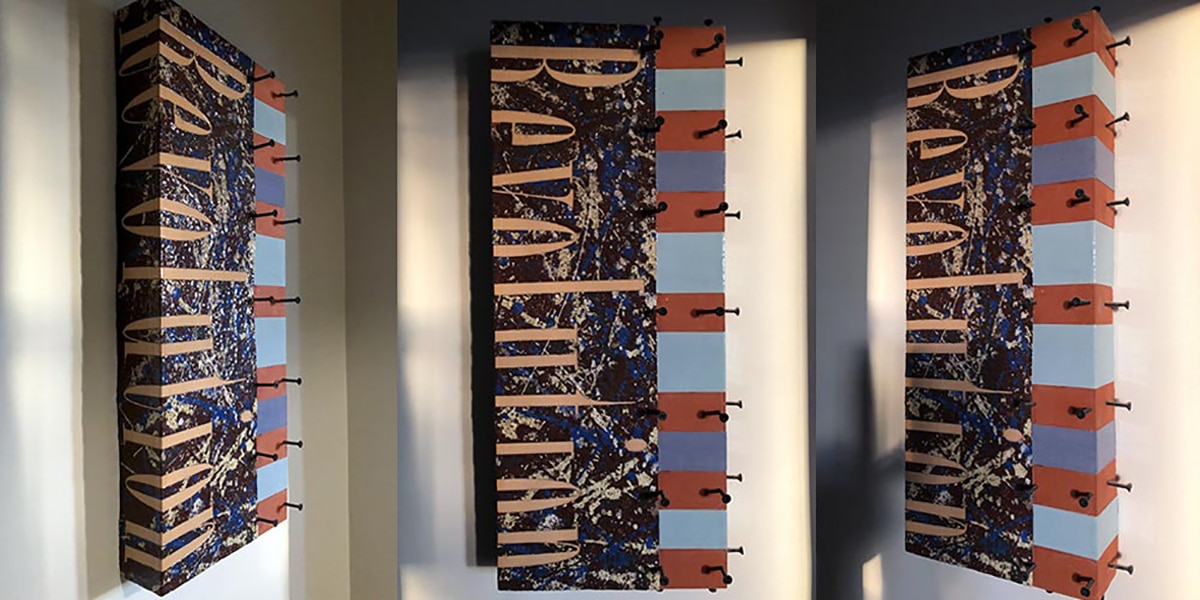 I pass it every morning when I rise. It hangs there silently at sunset in golden hued shadows delighting and taunting my piqued sensibilities. I take it in. It takes me in; into a place three thousand miles away, under the shadow of a needle in space. The place: Seattle. The date: Friday, June 23, 2000. We’re all waiting for Patti Smith to take the stage of the Mural Amphitheater at Seattle Center for the opening of the newly completed. Frank Gehry designed, Experience Music Project.

I’m there with my friend Amy and her partner Nicole. Everyone is sitting or standing on the grass as Patti takes the stage. She opens with a homage to the man who inspired Paul Allen to build the EMP: Jimi Hendricks. The band eases into Jimi’s “Hey Joe” as the opener. Mind you, I had never seen Patti Smith live before, and this show ranks in my top 5 shows—it was that good. Patti at the time didn’t tour much because of health issues. I thank the universe for letting her be well enough to be there that day. The entire show was pure Patti—art, poetry, music, politics, and power! Patti was mystical and magical that late June afternoon. It was toward the end of the show, Amy and I had moved up to the front row stage left. When I heard the the opening line of the Allen Ginsberg inspired Babelogue: “I haven’t fucked much with the past. But I’ve fucked plenty with the future.”—I thought my head was going to explode! I stood there reciting at the top of my lungs—and then—she launched right into “Rock ‘n’ Roll Nigger”. I jumped, pogoed, danced, sang, screamed and was just catapulted into the stratosphere. By the end of that night I was bashed, famished, and still glowing—for days after.

Throughout the show Patti was Patti. Music, power dialoging with the crowd, stories, politics, bits of poetry, and so much more. But for whatever reason, and I don’t remember (now) what song she was beginning or ending, she blurted out this couplet that just stuck with me: “The Revolution Is Coming. Please Take Care Of Your Teeth.” It was revolutionary and silly, and so Patti. Was that her intent? Art is art. In it’s purest form it creates dialog; between the object, the word, the phrase, and it’s recipient/viewer. And in that moment and for weeks to come it stuck with me. 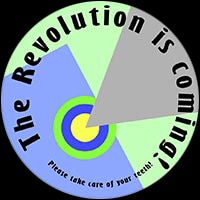 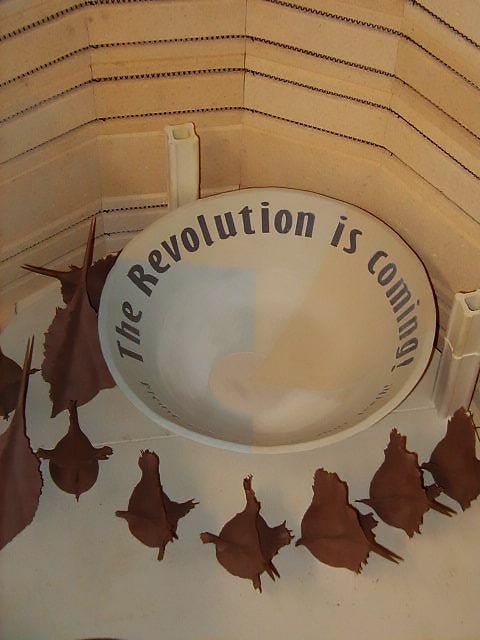 During this time I had my own clay studio in Seattle. And with Patti in my head, I was inspired to make two pieces: a bowl and the wall hanging piece “Revolution”. The bowl shape was a widening and flattening of an angular bowl form I had used many times before; all hand-built from clay coils. I never used a throwing wheel in my work, it was all hand-built using coils on a banding wheel, or for other flatter objects, slabs. Sadly, the bowl piece never made it past the bisque firing. I don’t remember what happened. I do know it was not usable in any form. But it’s sacrifice may have encouraged or informed the wall hanging.

Before and even while attending Alfred University (1992-1995) my computer was part of the tools I used in my art. I had used it to make decoration for my early pottery objects, and later I used it to design entire objects. Like any other tool, I never used it exclusively, but I never shied away from using it either. The interior design of the bowl including the graphic design and lettering were created in Adobe Illustrator. I’d print the design multiple times (sans color) as just outlines. I’d use an X-ACTO knife to precisely cut out the shapes and the letters, and use those wet with water in positive and negative to mask the placement of colored clay slips onto the leather hard object. This method allowed me to have hard lines of color and crisp font faces on my work. I really loved combining modern and traditional techniques in my work. 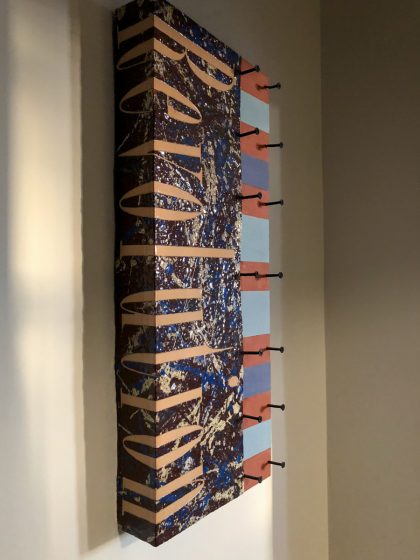 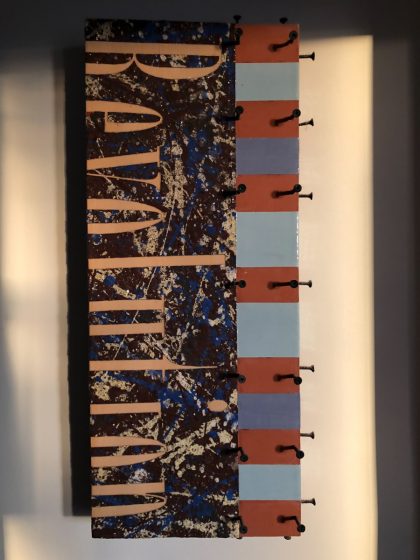 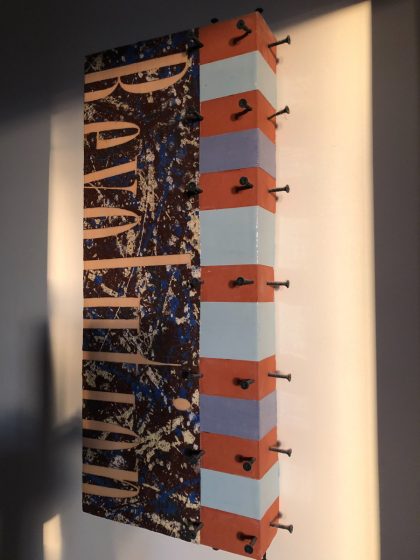 I don’t remember how long after the demise of the Revolution bowl, I started the Revolution wall piece. But I have to say: I still love this piece! It combines many techniques I had played with before and after Alfred, and some that were brand new to me. It speaks to so many of my sensibilities. From the Pollock-esque slip splashing, to the hard lined stripes of blue slip and bare earthenware clay body, repetition of elements, and design, the lettering bending and flowing off the top of the piece onto it’s side, it’s the addition of the self tapping sheet rock screws that were the revolution for me. I had experimented with other steel objects dipped in slip and fired, but never used sheetrock screws deliberately as part of a design. This is the element that takes this piece over the top for me. And it’s all about the artist—RIGHT?

I’m fortunate that this is one of the pieces that were not included in “The Great Condo Purge of 2011” and made the three thousand mile journey from Seattle to New Jersey—intact. I’m fortunate that I get to see it every day. But in that joy I’m also beset by longing. Longing for a time and a place where I could have another clay studio and create more art—even after all these years fallow. In those moments—like today—I allowed myself to get immersed in the creation story: from Patti’s lips to my unloading the final glaze firing. I’ve also tried to write it down so long after the fact. It’s not the whole picture, but like art, it leaves something to the viewer’s imagination and starts a dialog between viewer, object, and artist. 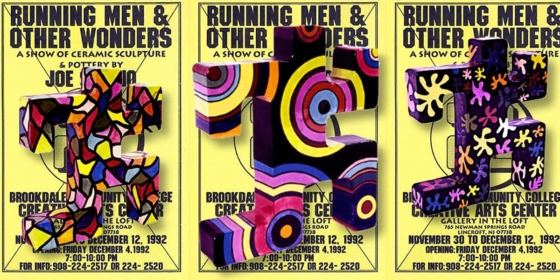 Running Men And Other Wonders

Siliconundrum – And So It Ends

And So It Begins 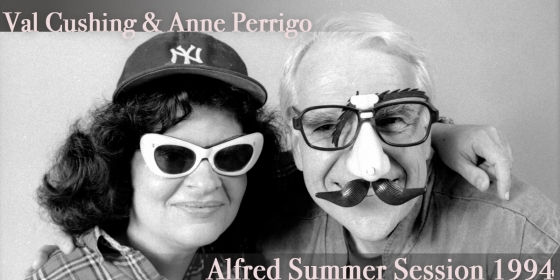 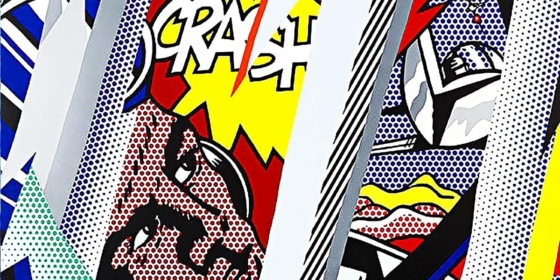 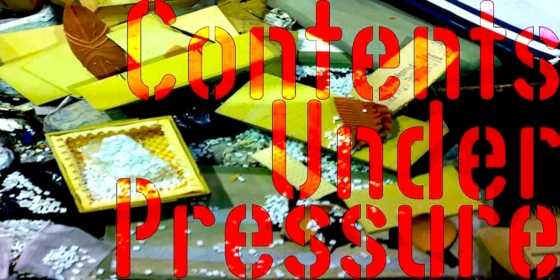